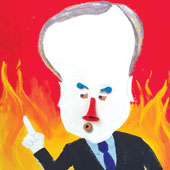 This Rolling Stone article on Bill O'Reilly is definitely worth a read for those who know of him. I was reluctantly exposed to this guy whilst in the US recently. It was excruciatingly painful, but what's a house guest to do?

Interestingly, the article claims O'Reilly apologised for "unintentionally misleading his audience" about WMDs, long before the New York Times issued it's own famous apology. If so he should be congratulated. However what the article doesn't say is that O'Reilly doesn't seem to require the same apology from Bush. Apparently it's OK for the Prez to be misled in good faith; apparently he was acting on information given to him by the CIA and other advisors. Notwithstanding this, it seems to be part of O'Reilly's style to concede points occasionally. As the article points out, he does like to occasionally throw in opinion that is, if not contrary, certainly perpendicular, to the conservative base. This confronts the viewers, and presumably makes them feel like they're getting the fair and balanced presentation they are promised.

Rolling Stone's description of O'Reilly as the central subject of the show, specifically as someone who reacts to the guests, describes succinctly what I saw of him. It's all about the spectacle of confrontation. Tthe verbal thrust and parry, sometimes witty, sometimes accurate, always pugnacious. In a lot of ways this show (and many others like it) resemble sports telecasts more than serious forums of debate. For example the phrase "match-up" was used by Fox to describe the, well, match-up between Michael Moore and Bill O'Reilly. It's all about the contest, and partisanship of the host, guest, and audience is expected. Points are scored, one side cheers, then the ball goes back to the centre circle. At the end of it all, noone is enlightened, noone is discredited, and we repeat it all again the next night with the next opponent. The only difference is there's no grand final.

Thankfully it seems that in Australia we prefer our competative sport more clearly identified as such on television broadcasts. And barring the occasional lapse, the standard of political debate is generally higher than in the US. At least we don't yet have a local import of O'Reilly, even for those dire few weeks between the football finals and the start of the cricket season. I for one would rather put up with horse racing.