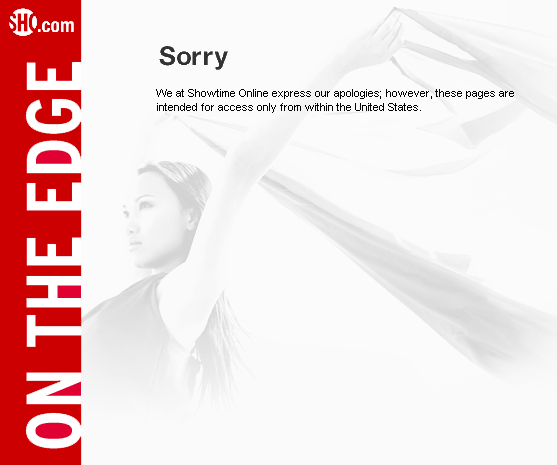 To the right is a screenshot from the website of Showtime a "premium" cable TV station in the US, like HBO. [Where "premium" means that they make their own (sometimes very good) shows, and show soft-core pr0n after 10pm. Err, apparently.]

So it looks like they're restricting content based on their guess of where you are. At work I have a couple of web proxies available to me, and sure enough the proxy in the US was able to view the website, but the one in Singapore produced the error message to the right. Also blocked was my home PC. This is actually doing a pretty good job of interpreting location based on IP address.

Normally when I come across an instance of similar stupidity (e.g. "you must be using Internet Explorer"), I just attribute it to another case of lazy/incompetant developers, and then work around it in one of the usual ways.

But for the life of me I just can't understand WHY? This clearly isn't a case of When Web Developers Go Bad - someone has obviously required that the software do this, and it's working as designed. So why? Again I ask: why?

Film & TV companies generally like to control the availability of their products in various geographic regions. Although I don't always like the way they go about this, I acknowledge that they want to ensure that, for example, the release of new titles is timed to coincide with expenditure on a marketing campaign. But that's not what Showtime are doing with their website. They aren't controlling access to their products, they're controlling access to the promotion of these products. Preventing people from finding out about the shows. What are they thinking? Are they insane!? "On The Edge?"

At this point I shall resist the urge to infer that an isolated incident is a precursor to a more widespread phenomenon, and end this rant.

[Update: Ars Technica reports, and I have verified, that the Bush campaign website is also blocking non-US visitors. Maybe it is going to be a widespread phenomenon soon...]

[Update 2: The BBC reports that the Bush site is blocked "for security reasons".]

I think there are probably national security implications. Check the Patriot Act.

Grrr... I got that while googling for info on Jeremiah's second season.