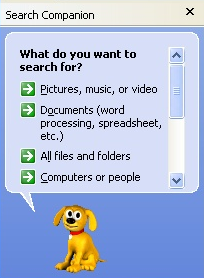 Ars Technica reports that Microsoft is developing their own equivalent to Google Desktop Search. Thankfully, it’s based on a technology they bought, called Lookout, and not the horrendous search “Companion” feature of XP (pictured).

The interesting bit to me is the fact that they bought this crucial OS component rather than built it into Windows.

I am not in general a fan of outsourcing. You risk losing control of the things that are most critical to your success, and you become very vulnerable. You can tell a lot about what a company views as their core business by what they decide to outsource (and whether or not they get away with it).

So in deciding to purchase the desktop search capability for Windows they either a) didn’t understand the importance of desktop search sufficiently to warrant internal resources to the problem, or b) went off seeking the WinFS holy grail and couldn’t find their way home. The latter sounds more likely to me: “WinFS is late guys, what can we do as a stop-gap to ward off Google?”

So Microsoft is playing catch-up again. But it occurs to me that Microsoft has never been in the business of blazing new trails with Windows features. Typically they buy (Lookout) or re-implement (IE) then assimilate. I just can’t think of a single feature of Windows that wasn’t acquired or copied. Umm, anyone?

[BTW I do think that Microsoft innovate in other areas, just not in the operating system. And yes I realise that Mitch Kapor’s ON Location invented desktop search in 1990 or so.]