Suckers Clueless n00bs Discerning users of Microsoft Internet Explorer will have noticed the weird "missing character" glyph in the title of a previous post will no doubt see the title of this post and wonder what the hell I'm up to. Firefox users on Windows seeing a question mark may be thinking the same thing.

The unusual character in the title of this post is a unicode character, specifically 0x2639, and otherwise known as WHITE FROWNING FACE.

[Incidentally there's no black frowning face in the unicode character set. There is, however, a "☺" (WHITE SMILING FACE, 0x263A) to go with the "☻" (BLACK SMILING FACE, 0x263B). Explaining this inconsistency is left as an exercise for the reader.]

The white frowning face isn't really a fair character to use on the web. This is because Windows doesn't seem to have a glyph for this character in any of the default fonts. So like I said, not exactly fair, but I couldn't help myself.

The disappearance of the 'not-implies' symbol from the title of the previous post requires a bit more explanation. It displays on almost all modern browsers that I have access to (or could be bothered installing), with one obvious exception. So, why doesn't it display on IE? A glyph definitely exists in the default set of Windows fonts for this character - otherwise it wouldn't display in Firefox. So what's up?

Let's save some time at this point and head straight for the source of all world knowledge:

Internet Explorer is capable of displaying the full range of Unicode characters, but can't automatically make the necessary font choice. Web page authors must guess which appropriate fonts might be present on users' systems, and manually specify them for each block of text with a different language or Unicode range. A user may have another font installed which would display some characters, but if the web page author hasn't specified it, then Explorer will fail to display them, and show placeholder squares instead.

Broken, or what? But I found it isn't quite as simple as all that. I had noticed that sometimes IE is able to find the right glyph for special unicode characters, and other times not. Experimentation was called for.

First I picked three fonts to test with: Georgia, Arial, and Lucida Sans Unicode. Using the Windows Character Map application I was able to pick two characters which were present in at most one of the test fonts. The first character was "♥" (BLACK HEART SUIT, 0x2665) and is present in Arial but not in the other fonts. The other character chosen was our favourite from last time "⇏" (RIGHTWARDS DOUBLE ARROW WITH STROKE, 0x21CF), which of the three is only present in Lucida Sans Unicode.

I then created a test page which attempts to display each of the two test characters in each of the three test fonts. Here is a screenshot of the result in IE: 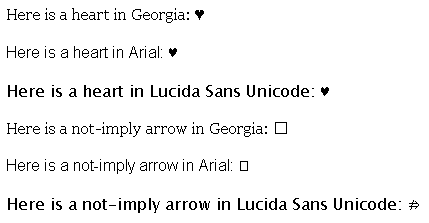 The thing to note here is that when a glyph does not exist in the chosen font, but it does exist in Arial, the Arial glyph is displayed. However this is not the case for Lucida Sans Unicode. Arial seems to be special in this way.

So this seems to explain why some unicode characters display and some don't. Basically, if it's not in the font you select, or in Arial, it's not going to get displayed by IE.

Just in case you were wondering, the list of alternative fonts allowed by the CSS font-family selector makes absolutely no difference. I can append Lucida Sans Unicode to the list of fonts used to draw the not-imply arrow, and it gives results identical to those above. Were you thinking you could add a bunch of "last resort" fonts like Lucida Sans Unicode to your alternative font list for the document, all for the benefit of IE users? Forget it.

Instead IE gives you a kind of "first resort" font. For IE to pick a non-Arial unicode character, you must know the correct font (a problem in itself), and it must be the first in the list of alternative fonts. In other words, you must have something like:

Which is fine if you want your whole document in that font. Which you probably don't. So if you want non-Arial glyphs to display in IE, you need to apply the appropriate CSS to individual characters to select the pre-determined Windows font that supplies the glyph. Bleagh.

In certain circumstances I (for one) can't even do that. I'm not sure if Wordpress officially supports the required HTML markup in the title of a post, but anyway I tried it and it doesn't work. So even if I particularly wanted to work around the IE breakage (which I don't) I would run slap-bang into another bug/limitation, that of Wordpress.

So instead I'll just ask IE users to contact your browser vendor for a fix to this problem. Good luck!

There may be another workaround, but I haven't tested it.

Not for you (the web-site owner), but for the 80-odd percent of the Internet users who are clueless noobs.

I figure if you can get an updated copy of the Arial font that includes all the relevant Unicode characters, the problem will effectively go away.

Then, I found that there is such a font already exists. It is included with late versions of Microsoft Office, but it is not recommended for day-to-day use because of its size (22 MB).

If I could work out how to substitute that font for C:\Windows\Font\Arial.ttf, it would either fix this relatively trivial problem, slow down my computer immensely, or destroy my Windows installation. Hmmm, maybe I will hold off on this experiment until I have a Windows installation I don't mind trashing. (You may insert your own cynical comment about what percentage of Windows installations that might include, right here.)

Fortunately I can verity that merely installing this font fixes the character glyph problems (including the WHITE FROWNING FACE) in Firefox.

I should mention that another fix might be to install the shareware Code2000 unicode font. This might be a more economical option than purchasing Microsoft Word if you don't already have it.

Hmm... I remember downloading Arial MS from the internets (for use in Linux, because I didn't have enough unicode fonts), and I think it may have been on a "microsoft knowledge" type base site somewhere. Something I noticed was that Arial was by far the most complete unicode font they had (at least, it was the largest to download). I think this is why IE does the Arial trick, because it thinks of Arial MS as the "one font to rule them all".

Sunny, you may be thinking of the Microsoft TrueType core fonts from the Web? This included some really nice fonts, including Trebuchet and Verdana, two of my faves. It also includes Arial, but I'm pretty sure it is an earlier version. The new Arial is 22MB, whereas the one available for download is in a 500K .exe (I can't be arsed downloading to see the extracted size, but I'm guessing less than 22MB).

The "one font to rule them all" idea sounds great (or at least acceptable) - if it worked. As I mentioned above, you end up with both Arial and Arial MS Unicode.

Interestingly, Microsoft no longer hosts downloads of these fonts from their site. However they are still widely available thanks to a non-restrictive license, at least that's what it claims on the sourceforge page.

You can learn more about font fallback & linking here: http://www.microsoft.com/globaldev/getwr/steps/wrg_font.mspx