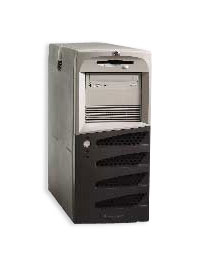 [File this one under "long and rather mundane tales of systems administration posted here for therapeautic purposes only".]

For a while now the main server at Chez Girtby has been an increasingly overworked HP Kayak. A nice machine, but very long in the tooth, with its Pentium 2 running at 333MHz. Fortunately my friend Mark had just the thing to replace it: another HP server, this time a TC2100 with a Pentium III 1.26 GHz (pictured). Just the thing.

The new server started off a bit shakily, being able to boot from neither its CD-ROM nor its 18GB SCSI hard disk. Fortunately I was able to revive each of these simply by re-seating the cables and interface board. Also it had a dying case fan, easily replaced. After a bit of playing, I got it up and running with the newly-released FreeBSD 6.0. And after that, about 12 straight hours of building software to upgrade it to the latest Gnome (I should confess to violating the upgrade instructions by not reading a good-sized book during this process - sleep beckoned).

So far so good. Migrating stuff from the old server has been going well: apache, samba, mysql, etc. Then it came time to get my printer working with the new server. One of the reasons for migrating was to get quicker printing thanks to faster postscript rendering.

I checked that the parallel port was enabled in the bios, and was being detected by the kernel. There were some tweaks required, but it looked OK. The dmesg output showed a parallel port, and the /dev/lp0 device was being created correctly.

Now to install CUPS. portinstall -sr cups does the trick, and after a bit of configuration I start it up. Following the documentation, I check to see that that the available printer ports are detected using the ipinfo -v command. Then the problem strikes: the parallel port is missing from the list of available ports. Which makes it hard to install a printer.

So I reflexively applied the most obvious troubleshooting step: hit google with likely search terms.

There were a few hits but none of them looked very helpful. One person suggested that the printer would behave like this when it was out of ink (and mine wasn't). So I turned the logging up to maximum. I tried setting the parallel port to polled mode (which failed, and in retrospect this should have been a clue to the real problem). I had even started downloading the source code to see if I could see what was going on. Yes, really.

While doing this I thought that I wasn't going to get the printer working before a reasonable hour. So I decided to back out and re-attach the printer to the old server so that Wifey could do some printing in the morning. Peering back to the rats-nest of cables behind my desk it then dawned on me that I hadn't plugged the printer into the new server. It was still attached to the old server. D'oh!

OK, so I know it was my fault really. But surely CUPS could have at least returned an error message, or some sort of indication that the port was there but it didn't have anything attached? After all, it managed to detect my serial port, even though nothing was attached to that. Hmmph.

what is it you do again? somthin to do with computers, right?