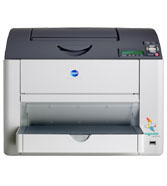 This is recently arrived at Girtby Global Headquarters.

But let me set the scene a little.

If you’re like me, your name is Alastair and you have a blog called girtby.net. And you’re probably old enough to remember when the Apple LaserWriter was introduced. 1985 to be exact. At the time it was the most powerful computer made by Apple, with a mighty Motorola 68000 clocked at a blistering 12 MHz churning out the pages.

I remember vividly, at the time it was introduced it cost ten thousand Australian dollars.

Eventually, and rather strangely in retrospect, the printing equivalent of Moore’s Law kicked in and we started to see printer prices approach affordability by mortals. Led by other technologies, laser printer prices have descended reluctantly. A few years ago, B&W laser printers became a reasonable alternative to inkjet. And now it seems it is time for the colour laser to enter the mainstream.

The Konica Minolta Magicolo(u)r 2430DL pictured above cost me a grand total of $540 shipped from my new best friends at Road Mogul (yes really). This is still a bit more expensive than a one-third-capacity inkjet cartridge — now sold by most manufacturers as a package with a free inkjet printer included — but I believe it will pay for itself pretty quickly. I estimate it is currently running at about A$0.20/colour A4 page for consumables.

For a complete review head over to Ars Technica. In the meantime, here’s what I like:

Overall, recommended. I give it a score of 8 out of 10 FBI tracking dots.

Steve, I moved your comment to the thread for the article you were referring to. See there for further discussion…