Categories
Provocation Or Something

Will The Real Football Please Stand Up?

A recurring source of amusement is the number of sports whose followers all claim ownership to the term "football". Wikipedia lumps them all together in one big, NPOV, article. As if they all had a legitimate claim to being called football. Naturally such neutrality will not stand.

I propose that one of these sports be selected and standardised by, I dunno, ISO or someone as the sport entitled to be called football. The rest of them will have to change their names.

The criteria by which sports shall be judged are: a) whether the foot contacts the ball with any kind of regularity during the normal course of the game, and b) how widespread the game is played around the world.

Let's look at the candidates shall we?

First off there's soccer. Played by just about every nation in the world. The foot contacts the ball often, the rest of the body rarely. It's a pretty strong candidate, you have to admit. 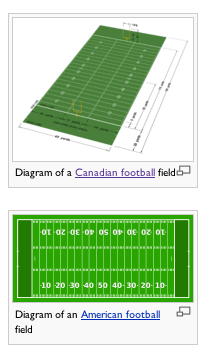 Of course, there's Australian rules football which, as you know, I am a bit of a fan of. Played in parts of one country, but at least boot hits ball fairly often. They have a strange hand-ball rule too but that shouldn't rule out a claim to being called "football". Still, not a strong candidate.

What else? Rugby league. This is the other Australian football, besides Australian rules. Or the other other Australian football if you count soccer (which as you may have gleaned already, I do). Anyway it's played in England, Australia, NZ and France by those too dumb to get into a Rugby Union team. Oops, did I say that last bit out loud? Not widespread, and very little foot-ball contact unless you count their silly play-the-ball move, which I dont.

I don't really think anyone still calls rugby union "football" but I suppose there must be some. Ironically the ball is kicked a lot more in union than in league, so if either of these is to be called football, it should be rugby union. Not as widespread as soccer, but then again what is? 20 nations competing at the world cup though, not too bad.

Gaelic football. It is the Irish version of Australian rules football. And its claim to being called football is just as weak.

The ISO should now deprecate the term "soccer" as it is obviously redundant.

I will now listen to your proposals for new names for each of the other codes.

Aussie Rules football already has an alternative name in Australia: Aerial Ping-Pong. Presumably this was coined by soccer fans.

After recent news reports about what the Rugby League players get up to on their nights off, "Rapist League" has a certain bitter truth to it, but I can't see it catching on. "Thugby League" and "Thugby Union" are more common.

American Football already has a good-enough name too: Gridiron. Although if you wanted to call it "Bloody-Big-Pansies-In-Their-Boofy-Padded-Armour-So-They-Don't-Mess-Up-Their-Perms Ball" then I can see that having a certain validity.

Frankly it's all thuggery. Cricket is the only ball game worth any attention at all. It's always amusing the way Baseball fans act as if their statistics and histories are somehow impressive, when one shortish eighty-seven-day game of Cricket can generate more statistics and analyses than everything Willy Mays and Babe Ruth ever did...

There is also the All American Football League. Former degreed college players, getting paid and playing by college rules in the Spring.