A few years ago I purchased an Arc-AAA led flashlight, mainly on the advice of Dan. It was an excellent piece of kit. Small enough to carry everywhere but bright enough to be useful. For years it was the only thing that hung off my keychain (besides keys of course). A month ago it died due to a battery leak.

I wasn’t hopeful of saving it. Since I bought my unit, the guy had stopped selling them for a while, and then been bought out by another company. Nevertheless I wrote to the new company and asked if it could be fixed. They said sure, send it in. A few weeks later, this arrived: 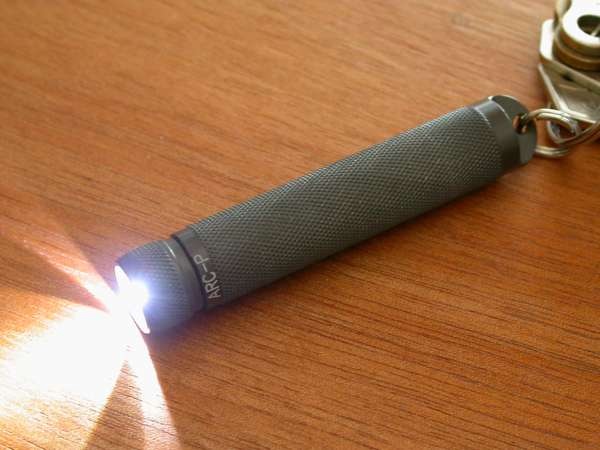 The new one is slightly heavier I think, but feels more rugged. The knurled metal case is that dull greenish-grey colour, as might be carried by Brown from Spook Country. The light is activated by twisting the head, and the new unit has a lot more resistance which makes it a lot less likely to turn on in your pocket. It’s at least as bright as the old Arc-AAA, in other words surprisingly good for the size (and capable of out-shining any AAA Maglite). If you want to get really mental I see there’s now a “premium” version which is even brighter.

The quality of the unit itself and of the support from the vendor gets two thumbs up from me.

How much did they charge for the “repair”?

How much did they charge for the “repair”?

Nothing! All I paid was shipping from here to the factory.

The fact that it’s marked “P” means that it is the premium version; the one with a 9-lumen Nichia DS led.

As for heavier/more rugged, you’re right on both counts. They’ve been redesigning the light constantly and improving it, the changes from your old version include:

I don’t remember the packaging saying anything about the Premium version, but either way I’m happy!