They Don't Call it Hardware for Nothing

A while ago I sat down with some unusual tools and my failing eyesight to rescue a Nintendo DS that had suffered an Act Of 5-year-old. It wasn't too damaged, but the hinge area had cracked and so it had a tendency to fall apart. At the time I was expecting to pay around $200 for a replacement.

But then I discovered DealExtreme. Oh. My. Dog. That site is so awesome. It's like a massive south-east Asian computer market but instead of all the cheap cool gadgets being strewn amongst a thousand tiny stalls, they are all catalogued, displayed online and available for purchase with international shipping included. Just amazing, have a browse.

Whirlpool has a DealExtreme FAQ on their wiki, highly recommended for Australian customers.

Anyway one of the things you can buy from DX is a full replacement housing for a NDS for $14.15. Sold!

It arrived a couple of weeks later (yes delivery is slow). I spent the afternoon swapping the old case for the new. Put briefly, you do not want to attempt this operation unless you really have to (or have rolled an 18 for dexterity).

The best instructions for Nintendo DS disassembly are available on flickr. I followed them closely and, for the most part, successfully. 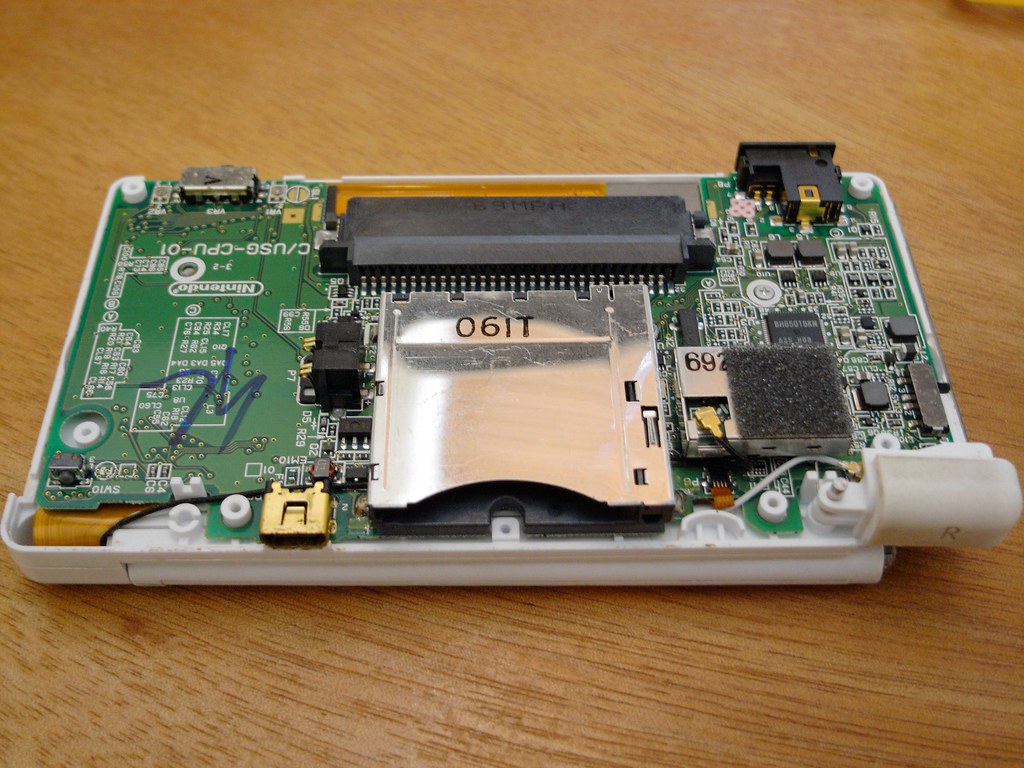 Here is a shot I took just after removing the back cover. You can see the broken hinge — which I have completely removed — on the right. After this point things get very tricky. See that ribbon cable on the left? That joins the upper screen to the lower PCB and was a complete bitch to get out.

The new case fit very nicely and everything went quite smoothly during reassembly. The shoulder buttons were only exception to this; it took literally about an hour of fiddling to get them both in and working. In the picture above you can see the right shoulder button still in place, with a little metal hinge that fits into the case itself. Well, when reassembling the NDS you have to align both of the button hinges and both of the little springs (not visible above) that are needed so that when you release the button it doesn't stay pressed.

In short, I stuffed up one of the springs. So now we have one button that needs to be pushed back out before it can be pressed again. This is livable for most games. Otherwise, everything works perfectly, and has for the last few months. If we want to play a game with a lot of shoulder-button action (eg Mario Kart), we generally play it on the other, pristine, NDS.

This is a relatively simple project that was described in an old (1994) issue of Silicon Chip. The kits are available everywhere, I got mine from Jaycar.

It's supposed to start chirping like a cricket when you turn out the lights. I don't really understand how it works, but it's something to do with a light-dependent resistor which increases voltage across an IC input. This apparently activates a little oscillator and that makes the noise.

Here is mine. It doesn't work. 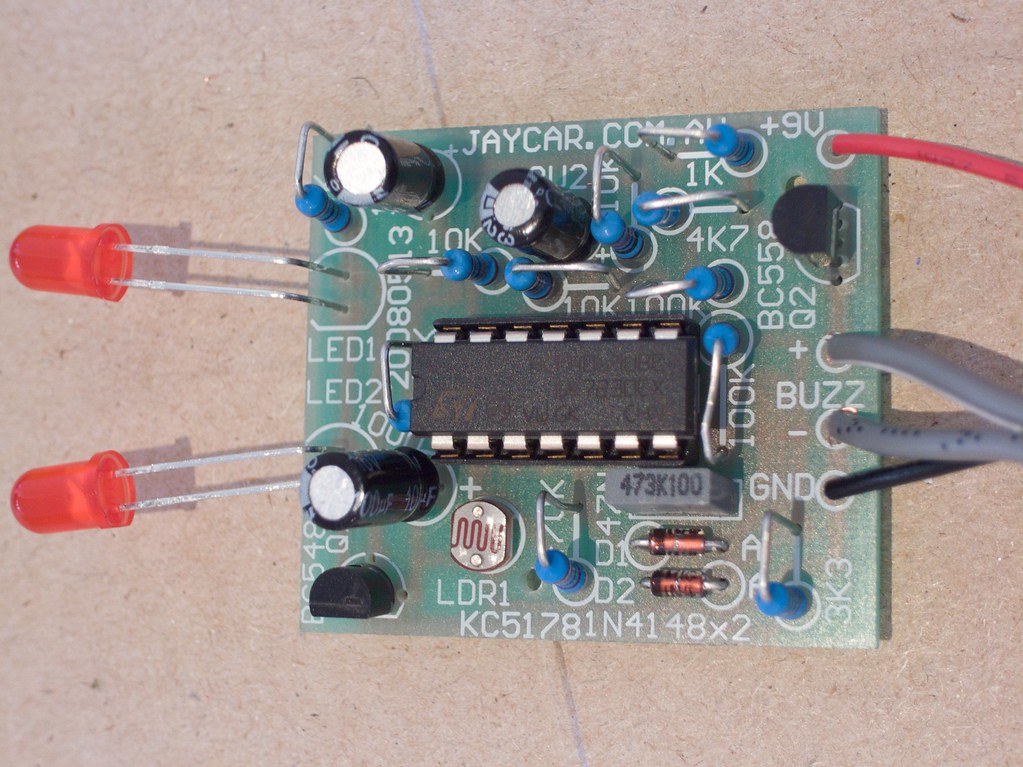 I've checked, and re-checked, and re-re-checked the components, to ensure that everything is in the right place, and with the right polarity. I've also checked my soldering which, while pretty dodgy in places, does at least look to be basically functional.

For future reference, diodes have the stripe on their cathode, not the anode. This is despite contradictory advice you might find on the internet.

I can get him to chirp by shorting various pins on the IC - which indicates that it is something to do with the logic parts of the circuit. Perhaps I've fried a transistor or something, I don't know.

There is an errata entry that might affect it. They say:

"...Also, the 68kΩ resistor on the parts overlay should be a 10kΩ value, as shown on the circuit diagram and parts list."

It's great that you're getting in to electronics now.

Without a circuit diagram for clifford, it's a bit hard to troubleshoot it remotely ;-)

However, according to this page, some things to check include:

One of your diodes looks the wrong way around.

Err, which one? Both have the non-striped end aligned with the A (for Anode) markers.

If the "A" denotes the "anode", then what do the circles mean? Could it be possible that the "A" simply means that the circle is the anode (as oppposed to "K" and a circle)?

Sunny: Nup, I'm pretty sure the circles are there to remind you to mount the component vertically, as I have done with the resistors. For whatever reason I didn't mount the diodes vertically as well.

Apologies to marxy and Martin, whose comments I had to rescue from the spam bin... :(

@marxy: I saw that errata; it had been applied to the diagram supplied in the kit.

@Martin: I also saw that hint (and in fact linked to it in the post!)

I've got a circuit diagram but am not really familiar enough with reading it to know how to do troubleshooting.

For example, how do I read it to know what the voltage should be at various points? Also, if I want to test a transistor in-situ, is that even possible? (Current theory is that I've fried one of them while soldering).

You're better off removing the transistors from the circuit to test them.

(On another note....any idea why my comment got flagged as spam? Was it due to the fact that I had an embedded URL in the text...or was it something else?)

On the subject of DealExtreme, as on many other subjects, Dan has worthwhile things to say.

Martin: I have no idea why your comment got marked as spam. I use the Akismet distributed spam detection system which I was moderately happy with the two false positives. I hate false positives. Not sure what I'm going to do about it, but I know I'm very reluctant to implement CAPTCHA or any other nonsense like that.

This is a stretch, but did you check the errata on the Silicon Chip web site? http://siliconchip.com.au/cms/A_104479/article.html

I’m 40 and just completed My Clifford.. he was my first little electronic thingy.

I felt lost most of the way but found a couple of pages that really helped me in trying to find out what resister was the one to use.

http://samengstrom.com/nxl/10116/5_band_resistor_color_code_page.en.html the above page really helped me sort out which was which.

(as they pretty much looked the same to me).. Plus i might need a magnifying glass to see the lines better.. (gosh i might be getting old - ack!)

Ps the diodes look fine.. on the instructions it said A was the positive side and K was negative.. so it looks like you have them the right way around.

Mine works pretty good.. just i was hopping for a better sounding chirp.. hope i have helped in some way .. Cheers Mary.